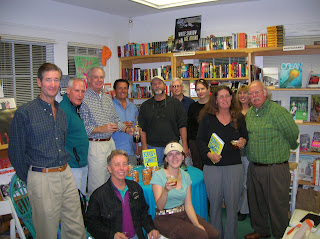 We had ourselves a lively and rather high-minded gathering at wonderful Inkwood Books, in Tampa. Instead of me just sitting there talking about "The Making of Bermuda Schwartz" or telling Caribbean tales, the conversation turned to such topics as increasingly shorter attention spans and how that effects writing , the making of a book cover, the demise of book editors who actually edit (except for Marc Resnick, of St. Martin's, of course) and an assortment of far-ranging topics.

Must be something in Gosling's Rum that fuels conviviality.

In addition to some other folks who cut out before we took the photo, I was joined by an old fishing buddy, a debonair restaurant critic, my cousin Helene, the man behind the world-famous Skipper's Smokehouse, several new friends (one them named LaDonna, like the place where Zack Chasteen lives), a fourth-grade teacher, a famous chef, a writer for a local newspaper and two rogue author pals, Jim Sheehan, second from the left (his "Mayor of Lexington Avenue" just came out this in mass market p-back) and, next to Jim, Tom Corcoran, author of the Alex Rutledge/Key West mysteries, bartender to Jimmy Buffett and one prince of a guy.

I am going to try to come today to Borders unless there is another major natural disaster. Peace.

Rum and Tom Corcoran...only missing one "pirate" from Cayo Hueso and the party would be complete. I wish I could be there!