The View from Chasteen's Palm Nursery 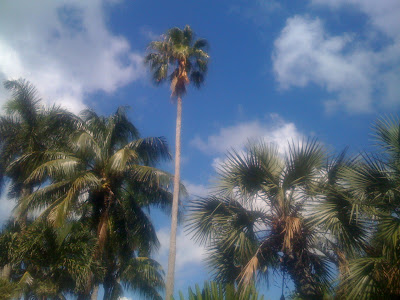 If there really were such a place as Chasteen's Palm Nursery, nestled on the shores of Redfish Lagoon, this is what I imagine it might look like. For the record, this photo was taken in The Garden of Palms in Fort Myers. Back in 2001-2002, when I was editor of Gulfshore Life magazine, I had an apartment in downtown Fort Myers and each morning I would go on a long walk that took me along the Caloosahatchee River waterfront and through the Garden of Palms. This was about the same time that I started dreaming up Zack Chasteen and writing the first chapters of BAHAMARAMA. How did I come up with the notion of making Zack a palm-tree grower? Well, this might explain it...
Posted by Bob Morris at 9:19 AM 5 comments: 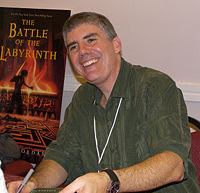 Earlier this week, I was feeling way-down in the dumps. A friend had sent me yet another article, this one from New York Magazine, that prophesized the end of books. It was a long, sad, doom-and-gloom story of dwindling sales and bankrupt publishing houses and, well, it was the kind of story that makes an author think: Just why the hell am I trying to make a living doing this when the future of books looks so bleak?

And then, last night, I had the pleasure of introducing Rick Riordan to an audience of 300 or so happy fans at the Winter Park Civic Center. I'd estimate the average age to be about 12, middle-schoolers mostly, an equal mix of girls and boys, all of them clutching copies of books from the Percy Jackson and the Olympian series and hanging on Riordan's every word. For those of you who don't know Rick Riordan (it's pronounced Rye-er-dan), a quick bio: A native Texan, he spent 15 or so years teaching school in California and Texas before turning his hand to mystery novels. Books from his acclaimed Tres Navarre series, set in Texas, have won the Edgar, Anthony and Shamus awards, which is kinda like the Triple Crown of mysteries. And then, at the urging of his sons, he wrote a book called "The Lightning Thief." It came out in 2005 and it tells the story of Percy Jackson, a twelve-year-old boy with dyslexia and attention deficit disorder who discovers he's the son of the Greek god Poseidon. And, oh yeah, Percy just happens to hold the fate of the world in his hands. It's a wondrous and enthralling tale where gods and monsters walk the earth among us, where your best friend might just turn out to be a satyr or your favorite teacher a centaur. The fifth and final volume in the series, "The Last Olympian," comes out in 2009.

Far be it from me to make comparisons with JK Rowling and Harry Potter, but they are inevitable. I'll say this: I'm a big fan of Harry Potter and, while I've only read "The Lightning Thief," I'm prepared to be an equally big fan of Percy Jackson. I suspect Riordan will be finding a much larger adult readership in the months ahead. "The Lightning Thief" is being turned into a film. The director is Chris Columbus, who also made the Harry Potter movies.

But back to all those happy readers at the Winter Park Civic Center last night. I met two boys, Sam and Eli, who told me they each read at least a book a week -- and that's outside of the required reading at their school. They play video games, they watch a lot of television, they spend an inordinate amount of time online. But they still find time for books.

Said Sam: "You can't get smart, really smart, unless you read books."

Thank you, Sam. I needed to hear that. And thank you, Rick Riordan, for getting a new generation of readers excited about books. The future is looking better....
Posted by Bob Morris at 7:53 AM 1 comment: