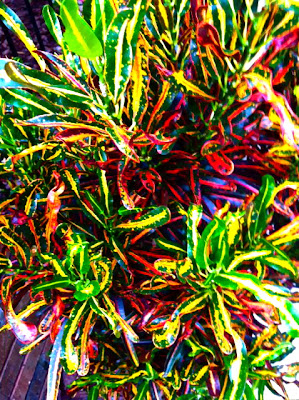 I've been reading lots of posts from Florida folks rhapsodizing about being up in North Carolina or Vermont or wherever and looking out on the mountains and seeing all those lovely trees turning colors and how it is just so gosh-darn gorgeous and breathtaking and ...

Hold on, y'all. We got us some fall foliage down here, too. I looked out this morning and this is what I saw: a croton more splendiferous than any tree in North Carolina. Crotons are promiscuous with color. And they perform for us ALL YEAR LONG.

As for our seasonal foliage, there's plenty to be found. True, some of it is kinda subtle and you have to seek it out. But I offer this Golden Rain Tree, which blooms every October, to demonstrate that Florida can put on a show of its own come fall. 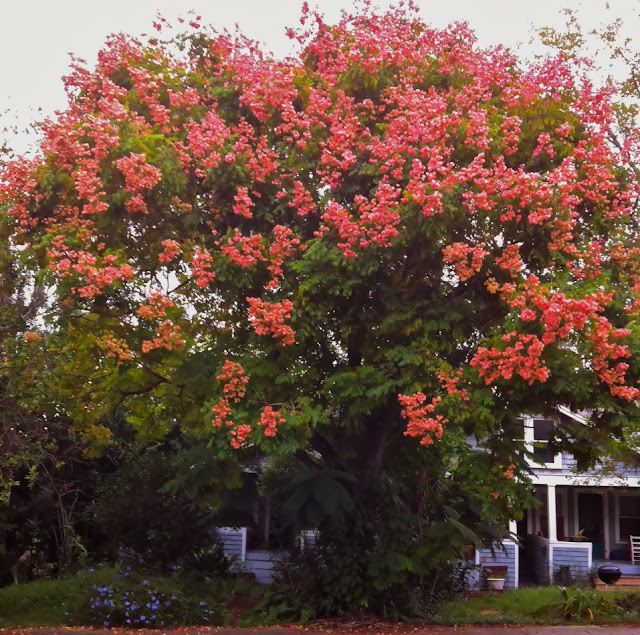 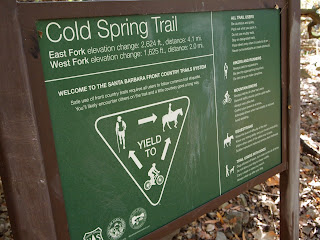 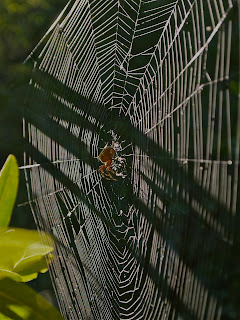 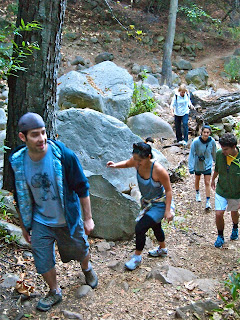 Headed back to my old Santa Barbara stomping grounds for a few days, and one of the first things our tribe did was hit our favorite hike -- the Cold Spring Trail. It winds through the hills above Montecito, hills that look a whole lot like mountains to flatlanders from Florida.

I can never figure out the yield signs. They kinda make my head hurt. Are mountain bikes supposed to yield to me? Or me to them? And what about the damn horses? Can't they pretty much do whatever they want? And what if I encounter a horse riding a mountain bike? Then what? So I just yield to everything and everyone. Especially dogs. If I wanted to get all Tao about it, I suppose it could be a credo for life.

There are lots of dogs on the Cold Spring Trail. Big, happy, hairy dogs that romp along ahead of their owners, jump in the creek that runs alongside the trail, roll in the dirt and the leaves, and then, invariably, choose to shake themselves dry the moment they approach me. Getting dirty from a dog-shake ain't a bad thing. They're just sharing a little joyous funk. There are plenty of times that I would like to jump in the water and roll in the dirt and shake myself dry on passersby. And then maybe lift my leg on a tree. Or stick my nose somewhere I shouldn't stick it. Or hump away with wild abandon. But until societal norms embrace such behavior, I'll take vicarious pleasure from random dogs on Cold Spring Trail.

As for the spiders... don't get me started on the spiders. Walk the trail early in the morning and you will surely catch a mouthful of gooey web. Go with it. Tell yourself you're foraging and this is a blessed gift from nature. Spider webs, I'm told, contain lots of protein. Eat enough of them and you just might see a horse riding a mountain bike.
Posted by Bob Morris at 6:12 AM 1 comment:

...it's Sunday and the Gators looked awful last night and Van the Man always puts everything in perspective (even though he is incapable of a smile), plus I got me a crush on the female saxophonist. 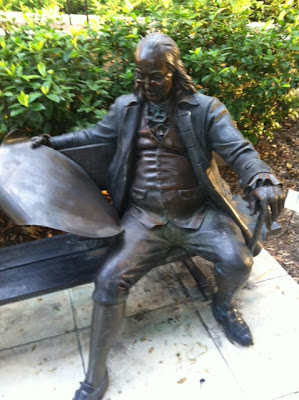 Each morning, on my walks across the campus at Rollins College, I pass this statue of Ben Franklin outside Andrew Carnegie Hall. And each morning, I give his head a rub. I started doing this, let's see, five or six years ago, thinking maybe other people would see me rubbing away and that might start a trend, which might lead to a Rollins tradition, and then years from now, when I am dead and gone, folks might fondly remember the guy who got the whole thing rolling.

Hasn't happened. So far, I have yet to spot another human being rubbing Ben's head. And when passing students see me doing it they tend to give me wide berth. Crazy old fart. But the squirrels like to perch atop Ben's head and every so often the ultra-efficient Rollins maintenance staff will come along with squirt bottles and get rid of the residuals.

Ben's forehead is shinier than the rest of him, and I congratulate myself to think I am responsible for that. Some mighty cogent thoughts came out of that head of his. It deserves to shine.

One of the many things that grieves me these days is how the honorable people in the Tea Party have claimed the Founding Fathers as their very own. They've made a grab for the Constitution, too. I'm fairly confident that Ben Franklin and his compatriots would not have abided such corralling. And I'm absolutely certain that the Constitution is open to all comers.

Speaking of which, here's my favorite Ben Franklin quote: "The Constitution only gives people the right to pursue happiness. You have to catch it yourself."

And each day I catch myself a little happiness by rubbing on his head.
Posted by Bob Morris at 11:19 AM 9 comments: 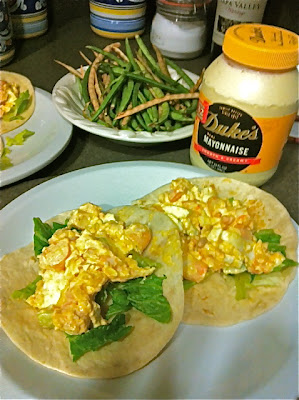 I'm thinking the reason Portland and Seattle have such notable food cultures is that it's often raining and folks stay inside and invent stuff to eat based on what they've got on hand because it's too lousy out to even go to the grocery store. We had almost five inches of rain yesterday, more coming today. And what I had on hand was some boiled shrimp, some eggs, some country ham and, as always, Duke's mayo.

I also had the Lee Brother's Simple, Fresh, Southern cookbook which served as a roadmap for this dish, even though I didn't have all the ingredients.

It wound up as Shrimp Deviled Eggs on Tortillas with Chunks o' Country Ham. Squirted it with a bit of sriracha because sriracha goes on everything. And it went down easy.

Supposed to be lousy for the rest of the week. Gonna be a whole lot of food-inventing going on. 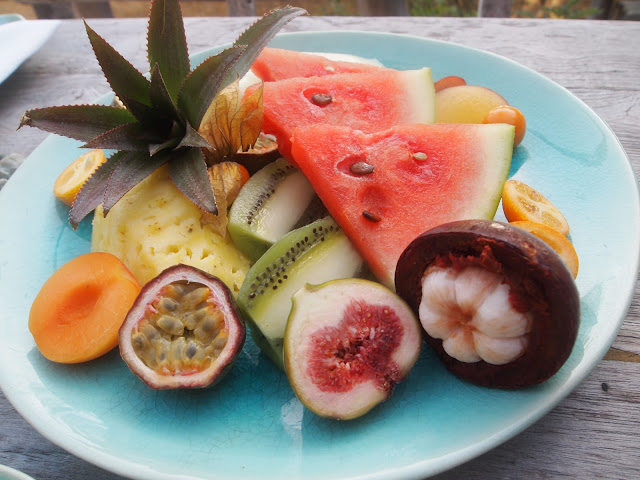 This is what breakfast looked like on North Island in the Seychelles. Almost too pretty to eat, huh?

So let's turn this into a little contest. There are nine different fruits on this plate. First person to identify all of them wins a free copy of BAJA FLORIDA. You can either leave a comment below, or shoot me an email -- bobmorris@mac.com

I SHARED A BED WITH PRINCE WILLIAM AND PRINCESS KATE 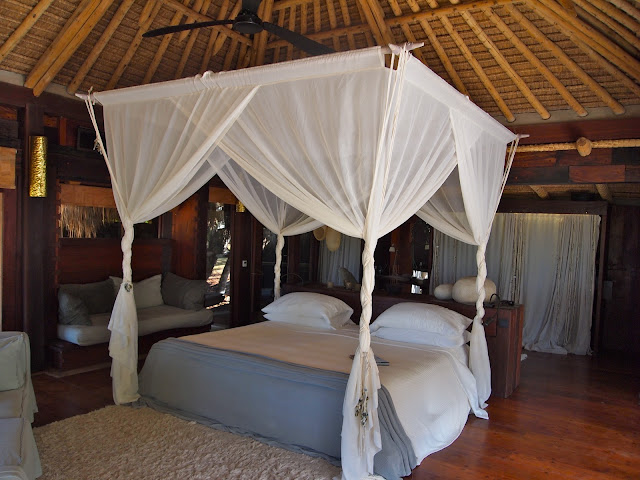 It wasn't until the second day of our visit on North Island in the Seychelles that we learned we were staying in the same villa where Prince William and Princess Kate hunkered down for their honeymoon just a few weeks earlier. 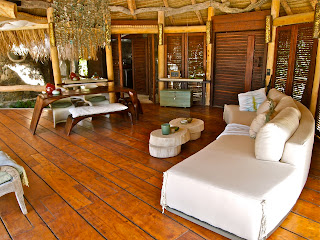 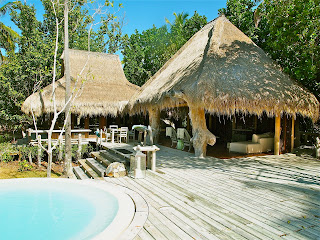 Pretty sweet digs. But the least you'd expect when the tariff is $3,000 per day. Per person.

Every now and then, being a travel writer on assignment has its perks.


There are only 11 villas on the entire island -- maximum of 44 guests with about 150 staff to look after them. Meaning, there is plenty of pampering. 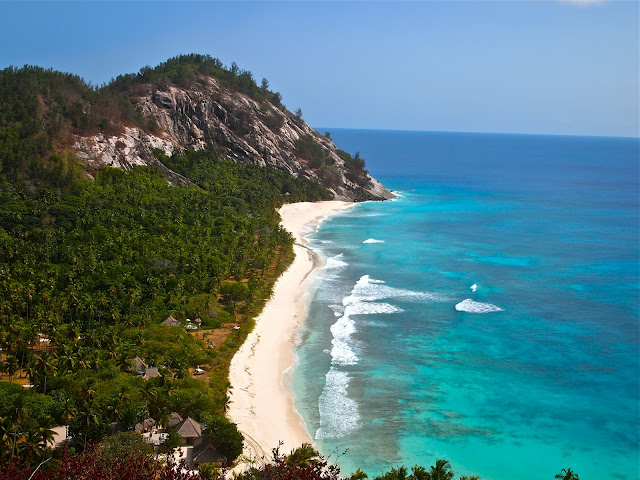 One morning, my wife and I set out on a two-hour hike with the island's naturalist. It was a fairly grueling leg-stretcher, the weather quite hot. When we returned to the villa, the bath was already drawn and waiting for us, with orchids floating atop the bubbles, a bottle of champagne chilling in an ice bucket, a box of truffles nearby. 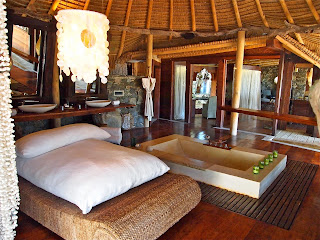 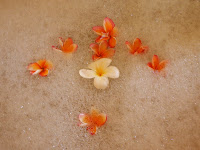 Yeah, a guy could get used to the royal treatment.