I'm stealing this one from my pal, Jim Swain, and retelling it here in honor of the upcoming Florida Film Festival. Forgive me, but

Guy comes home from work and his wife greets him at the door with a lustful embrace and says: "I want you to make love to me just like they do in the movies."

So he rips off her clothes, drags her to the bedroom, and spends the rest of the evening making love in every way he has ever imagined. And then some. The next morning, he wakes up to find that his wife has packed her bags and moved out.

"Why did she do that?" his buddy asks.

THE BEST-EVER OPENING PARAGRAPH TO A CRIME NOVEL

That's Charles Portis in the photo, former newspaperman, Arkansas hermit, and author of "The Dog of the South," "Norwood," "Masters of Atlantis," and "Gringos." Yes, he also wrote "True Grit," which, despite its various film interpretations as a western, is really, at its heart, a crime novel.

In my Crime Fiction class at Rollins College, students write the first 25 pages of a crime novel, and I teach them to pay particular attention to their opening pages. Most readers these days -- and that includes agents and editors -- have really short attention spans. If you don't grab them from the get-go, then all is lost. They certainly aren't gonna hang around for more than 25 pages to see if the book gets better. Nope, everything hinges on that first page.

Each term, I share with my students the opening paragraph of "True Grit." It has everything you could possibly want in an opening paragraph: conflict, setting, a strong and compelling narrative voice, and a terse summation of what the reader should expect in the pages ahead. Here it is:

"People do not give it credence that a fourteen-year-old girl could leave home and go off in the wintertime to avenge her father's blood but it did not seem so strange then, although I will say it did not happen every day. I was just fourteen years of age when a coward going by the name of Tom Chaney shot my father down in Fort Smith, Arkansas, and robbed him of his life and his horse and $150 in cash money plus two California gold pieces that he carried in his trouser band. Here is what happened."

I tell my students that if they succeed in writing an opening paragraph better than that one, they'll get an automatic "A" and don't have to attend class for the rest of the term. Hasn't happened yet, but there's always hope.

(One of my) New Favorite Florida Artists 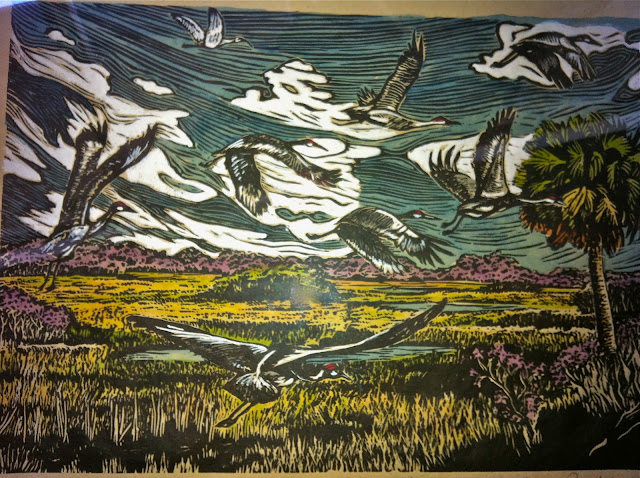 This is what I took home from the Winter Park Art Festival. It's called "Blowin' In" and it depicts one of my favorite Florida sights: Sandhill cranes lighting down on Paynes Prairie, just south of Gainesville.

It's a relief print made from original carved blocks of wood by G-ville artist, Leslie Peebles. I had a really tough time picking just one of Leslie's prints. I loved the one of mullet swarming above a spring boil in the Itchetucknee. Ditto with her depiction of pileated woodpeckers and black skimmers and palm trees and gopher tortoises. If you would like to see more of her work -- and this is something you really need to do -- then go here.
Posted by Bob Morris at 12:41 PM 1 comment: 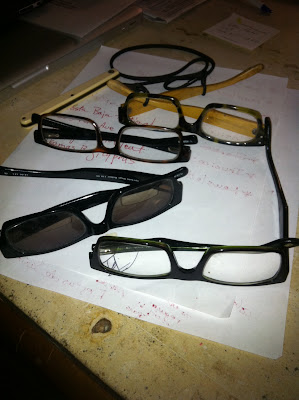 I mean, just because I've got four -- count 'em, four -- pairs of glasses sitting on my desk and close at hand, that doesn't mean a thing. Nor does it matter that I probably have another three or four located at strategic locations around the house (Downstairs bathroom? Check. Master bathroom? Check. Office bathroom? Hells to the yeah.)

Please note that up there in the left-hand corner I also have a knife. A very sharp vintage Florida fruitpicker's knife. I hone its blade each day.

It's at the ready should anyone choose to mock me for keeping so many pairs of glasses at my beck and call.

Not to worry. I have no intention of posting about how many times a day I have to stop work in order to pee. Or how I can never find a damn thing. Including my glasses.
Posted by Bob Morris at 11:34 AM 5 comments:

DIRTY JOKE ABOUT ONE OF MY FAVORITE FOODS 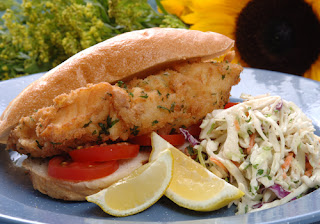 So this guy is driving down the Florida Keys and he stops at a roadside joint. There's a good-looking woman working the takeout window. Sign on the wall behind her says:

Guy asks the woman: "You the one who gives hand jobs?"

Guy says: "So wash your damn hands and give me a grouper sandwich."

WALKING AND EATING AND SPITTING 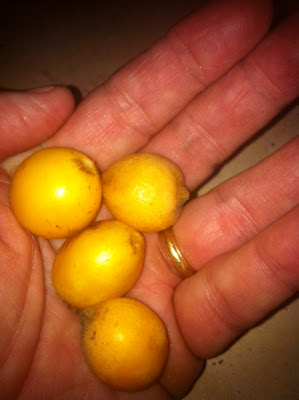 Yep, it's loquat (aka Japanese plum) season here in Florida. Meaning, a morning walk through my neighborhood brings free fruit for the picking.

Most folks with loquat trees think they are purely decorative and never bother eating the fruit ... which means, more loquats for me. Tastewise, they are kinda like mini-mangoes -- a peachy, juicy, sugar bomb.

But eating them requires the same technique one might apply to really soft boiled peanuts: You pop the whole thing in your mouth, chew up the goodness, then spit out the seeds and whatever's left of the skin (usually the little nub at the blossom end, which you can certainly swallow if your diet needs more roughage.)

I'm told that if you want to go to all the effort, you can make a fairly decent jam out of loquats and a passable wine (say, if you were in prison or something.) But I am content with walking and eating and spitting.