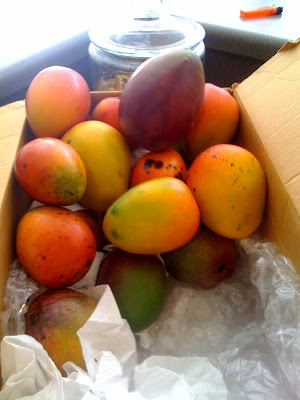 My cousin in Miami, Edith, sent me a box big box of mangoes the other day, bless her heart. It cost her a ton in postage and I owe her big time because the box contained some of her precious Early Golds, quite possibly the best mangoes on the planet.
The way it is these days, you can go to the supermarket and find mangoes any time of year. In the fall, winter and spring, they ship them in from Mexico, Brazil or Thailand. They are passable, I suppose, better than no mangoes at all.
But anyone with real mango lust and no cousin Edith in Miami, should take a drive to Pine Island, along Charlotte Harbor. It's mango heaven. You can load up with a bushel or two of the local varieties—Tommie Adkins, Hayden or, my favorite, the Valenciana—and happily sate yourself for a week or so, enjoying mangoes in all their manifestations. Mango margueritas. Mango chutney. Sliced mangoes on vanilla ice cream. Or plain old sliced mangoes with maybe a squeeze of lime juice on them.
I make my Pine Island pilgrimage every summer and I always think of Jack Floweree, who used to farm mangoes near Bokeelia. Floweree was nothing less than a mango prophet. Stop by his place – he called it the Mango Factory—and he would preach the many healthful benefits of eating mangoes and share his unflinching belief that mangoes are indeed the Forbidden Fruit of the bible.
“Mangoes have both good and evil in them,” Floweree would say. “The skin is poison to some folks and can make them break out in the hives. But the fruit is heaven itself.”
In Floweree’s version of the Book of Genesis, Eve plucked a mango from the Tree of Knowledge and offered to share it with Adam.
“You know how it is when you peel a mango. You make a mess and get mango juice all over you,” Floweree said. “That’s the way it was for ol’ Eve. She peeled that mango and when she was done she was covered in mango juice. She gave some of the fruit to Adam and he devoured it, thought it was the best thing he’d ever eaten, just had to have some more. And so ol’ Adam he started licking that mango juice off of Eve and, well, the two of them got to carrying on.
“That’s when the heavens parted, God pointed down and told Adam he had to leave the Garden of Eden,” Floweree said. “His voice boomed out: ‘Man, go!’”
Which leads us directly, with a few groans, to the very best way to eat a mango.
First, select your mango and find a sharp knife. Carry knife and mango to the bathroom. Take off all your clothes. Then get into the shower with your mango and your knife.
Slice the skin into four sections and peel it off. If, like me, you are a complete mango addict, then you will risk getting a little “poison” from the skin on your lips just so you can gnaw the fruit from the peel. Once the peel is dispatched, sit down in the shower. Hold the fruit in your hand and go at it. Let that mango juice drip where it may.
And luxuriate in the goodness.
If the heavens part and a voice booms out, “Man, go!” then you are on your own. But I suggest you go get another mango, peel it, and offer the Big Guy a slice.
Posted by Bob Morris at 8:18 AM 5 comments: