Bugs on the grill 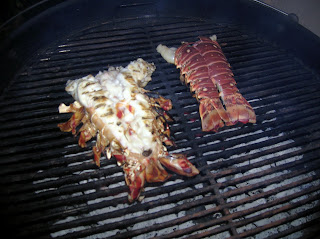 It's lobster season here in Florida, meaning :
1) You can don mask and fins and hit the reefs to bag a few bugs for dinner. Or,
2) You can hit the local fish market and pay $10.98/pound for whole lobster like I did.

In other words, that's $46.90 worth of Florida lobster we're looking at. One lobster weighed just shy of two-and-half pounds, the other just north of a pound and a half, the end result being slightly more than one pound of lobster meat. And if you do that math ... well, don't. Because it will ruin dinner.

Yes, it was good. My wife and I ate it with grilled romaine and corn on the cob. I was feeling kinda cocky because I went in for a physical last week and my total cholesterol came in lower than 180, which meant I got to indulge in plenty of drawn butter. And half a bottle of Spanish wine, a nice Grenache, which might not be the perfect accompaniment to grilled lobster, but I don't do white except under extreme duress.

The only real downside is that our house stinks something fierce because I put the lobster heads and all the meat-picked shells into a big pot, covered them with water, threw in onions and celery and garlic and pepper, and boiled it down for hours, creating a stock that I hope to turn into a killer lobster bisque.