Bethany Warner, a reporter for the Oshkosh (WI) Northwestern, interviewed me recently for a profile that will appear in this Saturday's lifestyle section of the paper. But anyone drooling for a sneak preview can catch it on Word Nerd, which is Bethany's fine blog. 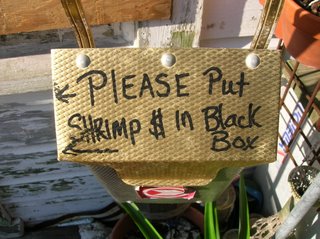 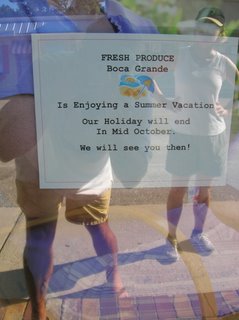 My wife and I (that's us in the photo's reflection) spent last weekend down in Boca Grande and it was good for the soul. Mainly because Boca Grande is the last place left in Florida that still embraces what used to be an honored tradition in these parts — shutting down for the month of September.

Time was when Florida enjoyed a true Off Season, a blessed interlude when sensible heads prevailed and everyone understood that it was just too damn hot and miserable to carry on with everyday life, much less attend to tourists. Tradition held that after Labor Day the state was ours until sometime in mid-October when the first of the snowbirds came trickling down. September was when things got truly slow. It was a most restorative month.

It's still that way in Boca Grande, which sits on Gasparilla Island, along the north shore of Charlotte Harbor. Despite being an enclave for the super-rich — you can't buy a place here for less than a million — Boca Grande hasn't gotten too gussied up over the years. The beach is gorgeous (although there was a lingering tinge of red tide while we were there.) Iguanas rule the roost (Boca Grande even imposes an "iguana levy" on local property tax bills to help control the critters.) And condos have yet to supplant Whidden's Marina, where they still sell live bait shrimp on the honor system.

Downtown Boca Grande was locked up tight. Almost everything was closed for the next month or so, including Hudson's, the island's only grocery store, and The Temptation, our favorite watering hole and restaurant. But that was fine. We'd come for the quiet. And we spent lots of time on the back porch by our room at The Innlet, looking out on the water and the mangroves.

One morning, I got up early and was casting a white bucktail jig around some pilings near the dock when I got a strike, set the hook and the line ripped off the spool. Snook season had just started and I knew it had to be a 30-pounder. Debbie was standing on the dock and I heard her shout: "Look, a manatee!" I turned and, sure enough, just a few yards off the dock, a massive gray hulk poked its snout out of the water and gave a snort. And, in that instant, I gave that 40-pound snook a bit too much leverage. It wrapped the line around a piling and broke free.

Still, I'd hooked a good fish, seen a manatee in the morning, had some quiet time with my baby ... all was right with the world.
Posted by Bob Morris at 10:28 AM No comments:

A few years back, when I was living in Santa Barbara, I was passing through LAX when I quite literally bumped into Richards as she was leaving a newsstand. I got all gushy.

"I'm a big, big fan," I told her, and went on to thank her for all her work on behalf of Democrats, but most especially for her wonderful way of talking. She was plain spoken and brash and wonderful in the way that Texans can be when they aren't being, well, Texans. Her shining public moment, of course, was at the 1988 Democratic convention when she told us to have pity on George Bush the First, who passed on his gene for convoluting the language to Bush the Younger.

"Poor George, he can't help it," Richards said. "He was born with a silver foot in his mouth."

I was at Madison Square Gardens that night, covering the Democratic Convention for The Orlando Sentinel when Richards made her speech. And I told her that I much enjoyed her many barbed remarks at the expense of Republicans.

She smiled and thanked me. And in that honeyed sandpaper voice of hers, said: "Darlin,' I would have said a whole helluva lot more, but there were children listening." 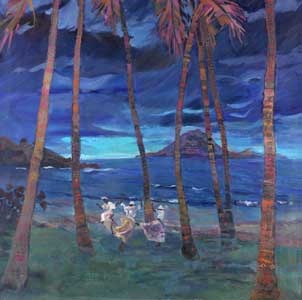 This is what I look at every day, when I'm not staring at my computer screen. It's the painting that occupies the far wall of my office, and when my attention drifts from the work at hand -- as it so very often does -- this is where it lands.

A few months back, my wife and I were on St. Kitts, just wandering around the streets of Basseterre with no particular destination in mind, when we chanced upon a gallery that featured the luminous work of Kate Spencer, a London native who has lived and painted on St. Kitts for the past 20-some-odd years.

“If you have the time, you really should visit her studio in Mt. Pleasant,” the gallery manager told us. “It’s quite a magical place.”

So we rented a car and headed north, arriving at the lovingly restored plantation estate Spencer shares with her husband, Philip Walwyn, who was engaged in an artistic endeavor of his own — putting the finishing touches on a 12-meter classic racing yacht that he had built from the keel up. Spencer, lovely and petite with smile lines etching her face, was working on a watercolor in her studio, but took a break to show us around.

“Just make yourself at home,” Spencer said, returning to her painting.

A Brahms violin concerto played on the stereo. A cool breeze wafted through the wide-open windows. The view from the hilltop estate looked out on a stretch of stately palms that lined the north tip of St. Kitts, along the channel separating the island from neighboring St. Eustatia. I turned and, on the wall behind me, spotted a painting of those same palm trees, with St. Eustatia in the background. Entitled “Dance of the Jumbies,” it showed three women in long white skirts dancing beneath the palm trees by the light of the moon.

Jumbies are what island folk call the ghosts who walk among us, the souls of the recent dead. In Jamaica and other islands, they are also called duppies. I've come across all kinds of jumbie lore in my travels to the Caribbean. Once, visiting Montserrat, just weeks before the Soufrierre Hills volcano blew the lid off the island, I sat down at the Bird's Nest, a bar in the capital of Plymouth (now under several feet of volcanic ash.) My table was by the window and a glass sat on the windowsill with a finger or so of rum in it. Thinking I was helping the bartender tidy up, I dumped the rum out the window.

The bartender let out a shriek.

"Oh, mon, what you do that for?" he said, a look of real terror in his eyes. He came over with a bottle of rum, poured some in the glass and put it back on the windowsill. "Dat's the duppy glass, mon. Duppy get pissed off we not leave dem somethin' to drink. Duppy come here and burn my place down."

And that's how I learned about duppies and jumbies.

In any event, my wife and I bought "Dance of the Jumbies" and installed it in my office. It looks much better than the image up top. It hangs in a place where the afternoon light streams in and it seems to change colors throughout the day.

And when I come up short in the writing and don't know where to go, I go there. To dance with the jumbies...
Posted by Bob Morris at 4:01 PM 1 comment:

Don't worry, it will soon be a Wal-Mart parking lot

Yet another reason why I gave up jogging in Florida.
Posted by Bob Morris at 8:11 AM 1 comment: 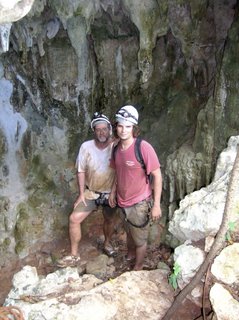 The handsome young guy above (other than me, of course) is my younger son -- Dashiell MacDonald Morris. Dash has endured many things during his twenty-four years, starting with the name his mother and I bestowed upon him, in honor of Mr. Hammett and John D. His first day of kindergarten, he came home complaining: "I've got the weirdest name in the whole school." Teachers could never get it right -- Deeshul, Dayshul, Da-Shell. When he walked across the stage for his high school graduation, the announcer intoned: "Dah-she-ell..."

But he's down with his name now. He's read "The Maltese Falcon" and a goodly number of the Travis McGee books. He knows from whence he came. Plus, he's always the only Dash in the room. A lot to be said for that ...

Our family visited Jamaica recently to celebrate Dash's graduation from the University of Florida (B.S., Environmental pre-law, natural resources conservation -- anyone got a job for him?) and while there Dash accompanied me on assignment for National Geographic Traveler, exploring the caves of the Cockpit Country. This is part of a feature I wrote, entitled "Extreme Caribbean," which will appear in the October issue of the magazine.

We teamed up with Stefan Stewart, a founder of the Jamaican Caves Organization, a semi-crazed Canadian speleologist who would not be insulted by my description of him as a cross between Dana Carvey and Gollum, from Lord of the Rings. He's a small salamanderish guy who smokes cigarettes like crazy, drinks beer even crazier and is still able to handle the balls-to-the-wall physical exertion that is part of caving. The photo above was taken after we had spent five hours climbing and crawling our way through Deeside Cave in Trelawney Parish. It's an area dubbed as "The Land of Look Behind" by the 18th-century British soldiers who tried, unsuccessfully, to battle the runaway slaves, known as Maroons, who settled the interior of Jamaica.

For our assault on Deeside we wore helmets with headlamps and carried rappelling gear. We rappelled down a 50-foot cliff and then back up again. The back-up-again part was quite possibly the most difficult thing I've ever done in my life. (Please notice that in the photograph I am holding onto Dash for support.)

There were bats. And there were lots of tiny wormhole tunnels where we had to get down on our bellies and slither like reptiles. At one point, slithering through a particularly tight wormhole, trying to control my until-then undiagnosed claustrophobia, I said something like: "Sure is a lot of mud in here."

So, that's not mud covering us in the photo above. That's guano. I'm told it makes great fertilizer.

Beyond that though it was a most exhilerating and exhausting expedition. At the bottom of our descent, after proceeding through The Canyon and Hanging Gardens Chamber, we stopped at the River Pit, where the roar of rushing water some 50 feet below competed with conversation. Stefan told us to turn off our headlamps.

“Behold absolute blackness,” he said. “No place on the planet gets any darker than this.”

I stuck my hand in front of my face. I could not see it. I looked all around -- there was not even a glimmer of light. It was black, black, scary black.

For the record, I was the first one to turn my headlamp back on ...
Posted by Bob Morris at 9:07 AM 6 comments: