It's All Over in a Flash

I cannot vouch for the authenticity of the image above. It purports to be a shot of the "flash of green," taken somewhere along the Atlantic.

Some people don't believe in the flash of green. I'm not one of them. I've seen it three times -- once in Grenada and twice in Boca Grande, FL, looking out over the Gulf of Mexico. Here's a little piece I wrote about it for Gulfshore Life Magazine...

My friend Sullivan likes to mix a cocktail late each afternoon and walk to the beach where he sits in a chair along the dune line and watches the sun go down over the Gulf. It is not unusual for Sullivan to stroll back to his house and replenish his glass at least once before the sun has completed its descent. It passes for exercise.

I often join him for the ritual. The company is good, the gin is top-drawer and the bugs don’t bite if there’s a breeze. Sometimes Sullivan’s wife, a fine and lovely woman but a woman who finds no particular enchantment in sunsets, will ask if we are going down to the beach to sit and drink. It is an oft-played scene and this is Sullivan’s cue for puffing up in mock indignation and saying: “Absolutely not! We are conducting research. We are looking for the flash of green.” Sullivan’s wife will snort a fine and lovely snort, and Sullivan and I will stalk off to do what we have to do.

Sullivan claims to have read, in its original French, “Le Rayon-Vert” by Jules Verne. The title of the 1882 novel by the prolific French author refers to that beguiling phenomenon we sit and drink and wait for. According to legend, originating among the Celts and spread by Verne, those who see the emerald spark that occasionally tap dances on the horizon as the sun disappears are rendered instantly incapable of being “deceived in matters of sentiment.”

Wrote Verne: “He who has been fortunate enough once to behold it is enabled to see closely into his own heart and to read the thoughts of others.”

Science offers far duller insight. Once, before joining Sullivan for an hour or so of arduous research, I went online, tapped “flash of green” into the search engine and was rewarded with an infinite amount of what passes for digital wisdom. There were lengthy and learned postings by astronomers and academicians who sought to explain the flash of green by tossing about terms like “refractive photopic conditions” and “frequency of disspersive spectrums” as if the planet was populated entirely by honor graduates of M.I.T. There were Web sites that showcased photographs taken of green flashes at outposts around the world. There were even photographs of blue flashes. Red ones, too. I printed out several pages and delivered them to Sullivan, thinking he might find it interesting.

He flipped through the pages, offered a few grunts, and then he said: “Does this purport to be the truth?”

“I’m too old for truth or science. I prefer Jules Verne,” said Sullivan, throwing the pages into a wastebasket. “Let’s go sit on the beach.”

And the whole way down there he grumbled: Since there surely is a flash of green, why would anyone see the need to prove it? Isn’t it enough to know that it exists? And why, for god’s sake, would some fool go to all the trouble necessary to take a picture of it? Just let it be, let it be ...

I have seen the flash of green three times, none of which occurred when I was sitting and drinking and watching for it with Sullivan. Indeed, each time I saw it I wasn’t really looking for it. I just happened to glance at the fading sunset and there it was. A gift, a freebie. I didn’t have to work for it. I feel almost guilty that it came so easily.

Sullivan, whose pursuit is diligent, perhaps even heroic, claims more than a hundred sightings, all from his chair in the dunes.

For the record, and despite the legend of “Le Rayon-Vert” and the alleged knack for reading the thoughts of others, both Sullivan and I remain sentimental dupes, forever capable of being deceived in matters of the heart.

“That woman,” said Sullivan, speaking of his wife, “she has deceived me from the moment I met her nearly fifty years ago.”

“Endlessly,” said Sullivan. “You ready for another drink?”

I gave him my glass and told him he should hurry. Sunset was almost upon us and he might miss the flash of green.

There was a breeze and the bugs did not bite.
Posted by Bob Morris at 9:06 AM 6 comments: 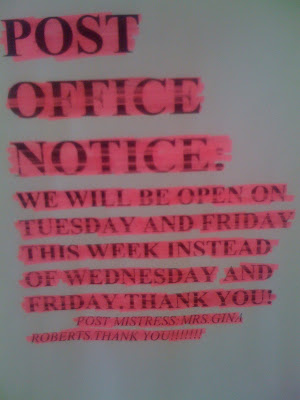 Sooner or later, everyone who goes to the Abacos makes it to Great Guana Cay. The big draw is Nippers, the rightly famous watering hole overlooking one of the Bahamas' most glorious strands, almost six miles of uninterrupted sand and gorgeous water.

If arriving by boat -- which is the best way, uh, the only way -- you tie off and walk through the Settlement, the only "town" on the island. You pass the Post Office. It probably won't be open. And it probably won't concern you in the least...
Posted by Bob Morris at 9:59 PM 1 comment: 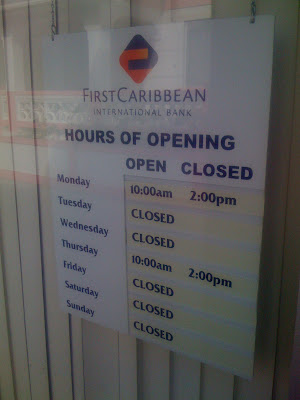 I was on Green Turtle Cay in the Bahamas a couple of weeks back and saw this sign in the window of the local bank. It's illustrative of the way this blog has operated for the past year or so. I've been keeping island banking hours. Meaning, Surrounded on Three Sides has been closed most of the time.
Several reasons for this, the main one being that I was way behind on the next book and I felt guilty writing blog posts when I should have been writing the book. But I am proud to announce that A DEADLY SILVER SEA is finally done. I turned it in to Marc Resnick at St. Martin's last month and it will be out in early December. I'll soon be posting the cover which, like the title, is quite a departure from the previous books in the series. And I'll soon be sharing the opening chapter or two.
But all of this is just to say -- Surrounded on Three Sides is open once again. Thanks for visiting. And I hope to be keeping more regular hours. At least for the near future.
Posted by Bob Morris at 1:47 PM 5 comments: