Mickey Mantle Hit On My Wife

Since the publishing world is abuzz today about the "shameful" new Mickey Mantle Novel, I thought it an appropriate time to haul out my own story about The Mick and his womanizing ways.

First, I should mention that Mantle was my hero when I was a kid playing Little League. I mean, I played centerfield and I wore number 7. I couldn't switch hit and my knees didn't give out at an early age, but otherwise, yeah, I modeled myself after The Mick.

But enough about me. This story is about my wife, Debbie, and her sister, Robin. In 1974, when they were 18 and 17 respectively, they happened to be sitting in Shay's, a bar/pool hall near downtown Fort Myers (yes, fake i.d.'s were involved.) It was March, spring training season in Fort Myers. The Twins were in camp and a procession of baseball fans and former players regularly passed through town. The waitress was soon bringing Debbie and Robin a round of free drinks.

Debbie and her sister were somewhat creeped out by the fact that a couple of "old guys" wanted to buy them drinks. But they were broke. And a free drink is a free drink.

As they got ready to leave, Debbie and Robin, being the polite young ladies that they were (and still are), stopped at the bar and thanked the men for their kindness. Whereupon the two men began making all the smooth, suave moves you would expect of middle-aged men trying to pick up teenage girls in a bar. Debbie and Robin wanted no part of it. Whereupon one of the guys jerked a thumb at his buddy and said: "Do you know who this is? It's Mickey Mantle."

As Debbie remembers it now "both of them just kinda shut up then and left us alone."

When they got home, Debbie and Robin told their father about the incident. He asked them what the guy looked like. They told him. He got out a photograph of The Mick. Yep, that was him, they said, definitely him.

According to those who've read the galleys of "7: The Mickey Mantle Novel," it's salacious as all get out (I mean, come on, it's a Judith Regan book) with Mickey even bedding Marilyn Monroe behind Joe DiMaggio's back.

But let the record show that he never even made it to first base with my wife.
Posted by Bob Morris at 9:16 AM 9 comments:

Librarians by the roomful 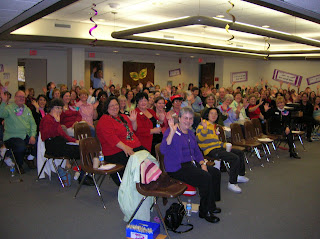 We've got gaggles of geese and exaltations of larks and even, according to a compendium of collective nouns, such things as an eloquence of lawyers and a superfluity of nuns.

But what, pray tell, do we call a group of librarians?

This question occurred to me the other day after I spoke to an altogether charming assortment of folks at the Seminole County (FL) Public Library System's annual staff day. Librarians are some of my favorite people. I mean, what's not to like about librarians? They love books. They share their enthusiasm with others. And they are the front line of intellectual freedom, championing unbridled curiosity and fighting the good fight against censorship and the so-called Patriot Act.

But when several librarians gather together what do you call them?

I've tried to come up with a collective noun that fits:

But I'm thinking maybe you can do better. So here's the deal: Send me your ideas. If you come up with the absolute-best collective noun that describes librarians, then you'll win a free copy of BERMUDA SCHWARTZ, which comes out in February.

The usual rules apply: 1) If you've won something here in the past then you are, sadly, ineligible. 2) And I reserve the right to make up any other rules as I see fit -- even those that seem stupid and arbitrary.