Confessions of a Food Writer 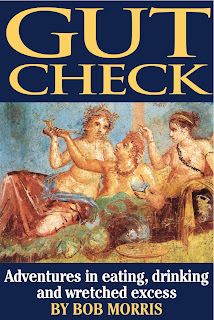 Here follows the introduction for GUT CHECK. And it includes one bombshell revelation about my former life (after the jump):


I’m a lucky guy. I get paid to write stories about eating food. It’s a pretty good scam. And if I could somehow figure out a way to get paid for, say, breathing air or getting dressed in the morning, I’d jump all over that, too.
Come to think of it, I have gotten paid to write about breathing air and getting dressed in the morning, but that’s a whole ‘nother book. This one is about food. It’s also about love and loss and hopes and dreams and life in far-flung places. It’s about people I’ve known and people I admire and people who bug the bejesus out of me. It’s about food I like and food I don’t like (a very short list) and food that makes my skin crawl just to think about (and I mean that in a good way.)